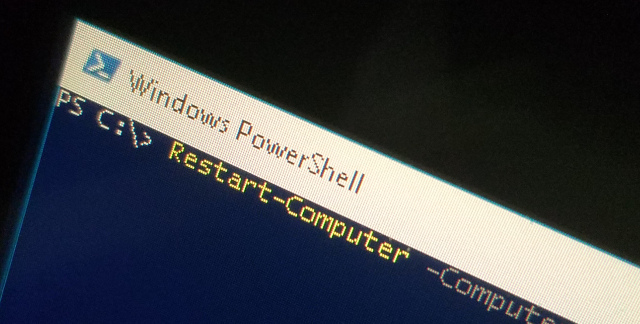 There will be times as a Windows Administrator when you will need to reboot or shutdown a remote computer or server.

In this tutorial, I’ll show you two easy methods for rebooting and shutting down remote computers.

Windows systems has a built in shutdown command that can be used to restart or shutdown local and remote computers.

The command is shutdown.

To use this command just open the windows command prompt and type shutdown.

To view the full list of command options type shutdown /? in the CMD window.

There are several command line switches, below I list the most useful options.

Now let’s move on to some examples

In these examples, I’ll be on PC1 and will initiate a remote restart or shutdown on PC2.

I’ll be using the /r switch in these examples, you can change them to /s to shutdown instead of restart.

By default, this will prompt the remote computer and give it about a minute before it restarts.

The pop up below is what a Windows 10 system will display.

Example 2: Restart With a Custom Message

You may want to display a custom message to the logged on users, to do that just use the /c command.

Below is the pop up on the remote computer with the custom message.

If you want to immediately restart with no countdown or message use this command.

If you just want to log a user off the remote computer use this command.

Restart or Shutdown with Powershell

Here are a few examples of how you can restart or shutdown computers with PowerShell.

The downside to PowerShell is it doesn’t have as many options as the shutdown command. There is no option to prompt users with a custom message or provide a countdown.

Example 1: Use Powershell to restart a computer

This command will immediately restart a remote computer. The -Force option will force a restart even if a user is logged on.

Example 2: Use PowerShell to shutdown a computer

This command will shutdown a remote computer. Use the -Force to force a shutdown even if a user is logged on.

Example 3: Use PowerShell to restart a list of computers

This is handy if you have several computers to restart. Just list all the computers you want in a text file and add that to the PowerShell command.

Example 4: Use PowerShell to shutdown down two computers

Want an easy way to check the uptime and last boot date on all computers? Then check out the tool below.

The AD Pro Toolkit includes 13 tools to simplify Active Directory and computer management. Download a free trial and try it for yourself.

26 thoughts on “How to Restart or Shutdown a Remote Computer”